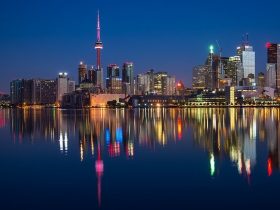 Volcanic ash leapt into the sky in a column three miles high on Friday, as Mexico’s Colima volcano began erupting. Located in the western region of the country on the border of the states of Jalisco and Colima, the 12,500 high volcano is less than 500 miles from Mexico City.

Ash has been raining down as far as 15 miles from the volcano.

One of the most active volcanoes in the country – and one of the most potentially destructive ones as well – Colima has certainly earned its nickname of the “Volcano of Fire” from locals.

The country’s federal civil defense office said that ash has been raining down as far as 15 miles from the volcano. Super-heated glowing volcanic rocks were reported to be raining down the sides of the volcano over a mile from the now-erupting caldera.

So far there have been no injuries reported by Colima’s most current eruption, as officials say that this new one seems to be much less in intensity than other instances. The last major eruption of Colima, which occurred in 2005, saw local residents evacuating from the region.

This isn’t the first volcanic eruption to be in the news lately. Last week Mount Pavlof began spewing ash into the skies of Alaska, sending ash plumes as high as 30,000 feet before slowly settling down. Like Colima, Pavlof is the most active volcano in the region; while the closest community is a safe 40 miles away from the Alaskan volcano, seismologists say that the current lull it’s experiencing could soon bloom back into a full eruption at any moment.

Meanwhile, Hawaii’s Kilauea volcano – which has been erupting constantly since 1983 – has sent a lava flow down its slopes that’s currently threatening the town of Pahoa, a village of around 1,000 residents. One residence has already been demolished by a finger of lava that broke off from the main flow, while another lava finger broke through a metal chain-link fence and flowed down a slope at the edge of the Pahoa Transfer Station, scorching asphalt in the trash depot’s parking lot. The main lava flow has been holding steady less than 500 feet from Pahoa’s main road for weeks.